The Year of the Snake

As we enter the Chinese Year of the Snake, we take a look at what the coming year has in store for us: what exciting projects we have in development and our aspirations this year.

Progress has been slower than we would have liked on Faustus. We were hoping to have released it by now, but we held off to wait for Kickstarter to launch in the UK and we’re now waiting for quotes and to get our campaign organised, but we’re absolutely looking forward to getting this off the ground and out there.

Hot off the heels of Faustus, we have so many other games in development. SCP Helix
has been in playtest for a while and as soon as the Faustus Kickstarter is started, we’ll be looking towards gearing up for this one.

A surprise project for us was SCP MUP, which has rocketed to the top of our schedule, despite having only been conceived back in November. Progress on this delightful game has been quick and we’re looking to get this into playtesting very soon!

SCP Chestnut has been in development for a while, but is nearing the end. We’re looking to get this into playtesting soon, but we’re very confident that much of the game is solid.

These two games feel very promising, and by the end of the year we’re hoping they might be ready to start finalising. It really comes down to how fast we can get the preliminary art and layout down. At the same time, we don’t want to rush them – so these games won’t come out until we’re totally happy with them. But, between you and me, we’re very confident.

There are a bunch of other games we’ve got on the back-burner that haven’t entered the codename stage yet, though some are closer than others. The tentatively codenamed SCP 2501 we’re very excited about is quite a big (and probably expensive) game, but we’ll be wanting to do a lot of playtesting on that!

Linda has been very hard at work these past few months on an exciting new endeavour with the SheBlackDragon brand name, which has had the one consequence of temporarily putting development on hold, but has the potential of giving us way more time to work on things in the future. It’s very exciting and we’ll be sharing that with you within a month or so.

Missed the boat and feeling left out in the cold? If you missed the chance to donate to our Indiegogo campaign, you can still give via PayPal. 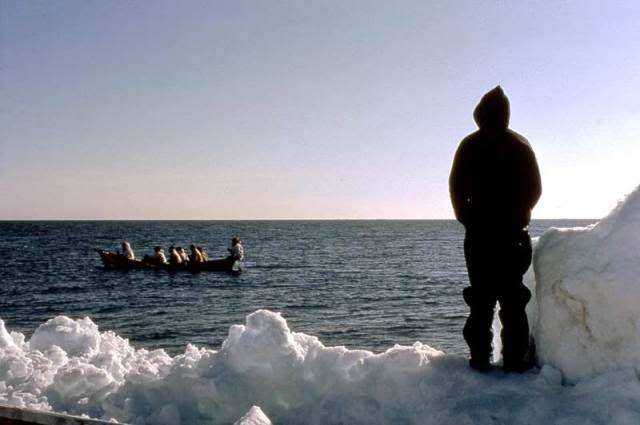 So, we didn’t quite make our goal on Indiegogo, but that’s not deterred us. We’ve already got Secret Codename Project Helix in alpha playtesting and we’re hard at work processing the Indiegogo fulfilments.

We know that there are at least a few people out there who wanted to give but didn’t quite have the funds yet, or would have liked to have given more but couldn’t at the time. We understand this and didn’t want to exclude anyone from having the opportunity to do so.

We’ve added a Donate button (which you should see to the right of this post) to our page. With this you can still contribute to our startup, even if you missed the chance in June.

Why should I donate?

Good question. We can’t promise to provide you with the same Perks we did on Indiegogo, but we can, at the very least, credit you as a funder along with those that did. If you contribute enough that we find impressive, we might well try to work out some kind of thank you gift.

Starting up a company is difficult. Both Nimrod and Linda work freelance, but focussing on the company is a difficult job that doesn’t reap any rewards for a long while. We’re riding on zero income as we work on products and somehow have to pay the bills and put food on the table. Add to that the cost of materials to make prototypes, travel to conventions to get our name out there, etc. It all adds up and this was the purpose of the original campaign. By falling short of our goal, we have to seek out clients for our other freelance work that ultimately postpones us working on Talking Skull projects. We’re just two people with a baby, so only one of us can work at a time until our little girl is older or is with her grandparents.

Even small donations are welcome. Every little helps.

But you’re a business, why give charity?

Absolutely right! Which is why we’ll take down the Donate button as soon as we start to see returns on our hard work. This is purely there for people who really want to help us get off the ground. We know that some of you are happy just to give without asking for anything in return for the sake of seeing a small family-run business get off the ground. This is for you!

Meanwhile, we’re also working towards getting a shop for SheBlackDragon‘s art. If you’d rather support us by purchasing goods, then feel free to wait for that to go live (no timeline yet on when that will roll out).

Our Indiegogo startup fundraiser is over!

Firstly, we’d like to thank everyone who gave us money. You’re awesome and what you’ve given will be a great help to us as we get our company up to speed. This will go towards us getting materials for creating prototypes, having the time to work on playtesting, developing the art and rules and making the games possible in the first place. We already have “Secret Codename Project Helix” (secret codenamed project name) in playtesting and have received good first reactions. As soon as possible, we’ll move into developing the art and pricing up the costs in preparation for our project-specific funding hopefully later in the year. Meanwhile, watch out for our Faustus Kickstarter in partnership with Chronicle City in a few months.

Over the next couple of weeks (and while Indiegogo process payments), we’ll be contacting our contributors and getting together the Perks that we can. Obviously, Perks including a copy of Faustus will be incomplete until the game is actually released, but we’ll be putting together the information and making sure we’ve got a nice clean off-line copy of everyone’s details.

Unfortunately, as you’re probably aware, we didn’t quite make our goal. Since we opted for the Flexible Funding on Indiegogo, while the fees are somewhat higher, we do get the money donated regardless. However, not having the full amount does mean that we might not be able to give our projects quite the attention we’d have hoped. This isn’t going to deter us, oh no! As you’ve already seen above, we’ve still got a solid timeline of work going and we’ll be rolling out lots more over the following months.

We know that some people really wanted to donate but missed the boat due to shortfalls that wouldn’t be resolved until after the Indiegogo deadline. We’ll soon be adding the option for you to give on-roller funding via PayPal. You may have missed out on the Indiegogo Perks, but if you donate enough we can probably work out a suitable “Thank You!” gift. We’ll announce it on our Facebook page, but if you’re not on Facebook just keep visiting our website.

We’ll keep adding improvements to the site over the month, also, and adding more features to help keep you informed and up to date. Watch this space!

Meanwhile, here’s a random picture of a monkey!

The Road to Faustus

Faustus was a long time in the making. The game’s creator, Nimrod Jones, talks a little about the process involved in making it from its conception through the various decks and playtesting.

It all began back in 2008 in Leicester at Continuum. Not only did I get to meet Sandy Petersen, the man behind Chaosium’s Call of Cthulhu roleplaying game, a game I particularly enjoy, but I also got to finally sit down and talk properly with Angus Abranson, co-founder of Cubicle 7. There was no business on the agenda with these meetings and I had no idea where the weekend would leave me.

With company, over drinks, I relayed a joking observation involving the Cthulhu Mythos that somehow turned into a challenge from Angus to make a card game, originally with a Cthulhu theme.

I’ve played a lot of games with fun sounding themes but rather dull mechanics. They sell on the strength of their theme or licence without much thought given to also making it a damned good game. So I set myself the challenge to focus primarily on making a game that was fun regardless of the theme. 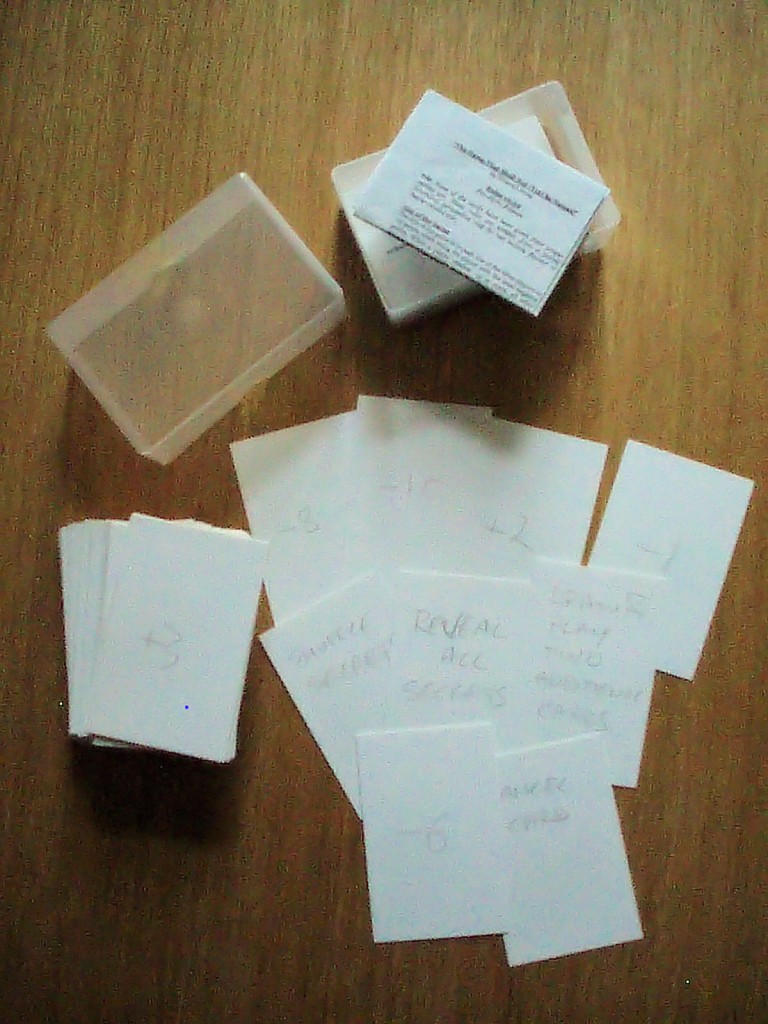 Alpha Deck in pencil on the back of business cards

After some deliberation on mechanics, one sleepless night (as is so often the way), I struck upon the idea of secrets (the core USP of the game) and temptation, corruption from gazing at things one should not gaze upon. As I deliberated upon how to go about manufacturing a prototype, my friend, who lived in the flat above me at the time, knocked on my door and, knowing I was devising a card game, handed me a box of business cards from his work. Perfect! In one sitting I wrote out the entire alpha deck.

It didn’t take me long to realise that this was a game with a minimum of three players. With two players, this would just be a race to see who could push the other over the top, but with at least three players, and immediately latching onto the idea that there can be only one winner else everyone loses, the challenge became much trickier.

In the alpha deck, there was no theme at all. There were positive (Banishings) and negative (Demons) numbers and the action (Spell) cards simply had written on them what they did. I presented the game to my playtesters without any preconception of theme, simply asking them to play the mechanics as presented to them. In the initial alpha plays we quickly identified a few kinks. One of the immediate ones was a card I’d put in that effectively changed the rules of the game while it was in play. Quickly deciding it was too tricky a card, this was the very first change I made and it was dropped from future playtests.

While everyone got into the spirit of the game quickly enough, after a while several playtesters identified a wariness towards looking at secrets and preferred to simply force people to look at them. As fun as the secrets were, what was lacking was motivation beyond simple table banter and innate curiosity.

I struck upon the idea of ‘enticements’, cards that would tempt people to their doom. These temptations gave the wary a motivation to take the chance and look at at the secret underneath. It was an instant winner!

END_OF_DOCUMENT_TOKEN_TO_BE_REPLACED

Help us fund our company!

Perks for funding include prints of Linda’s art, mugs, PDFs and copies of Faustus. Our current highest Perk includes personalised dragon art! Go check it out.

The Faustus Kickstarter is coming!

Watch this space, everyone!

We're finally getting quotes we're happy with and gearing towards getting started on the Kickstarter to fund Faustus.

To all our early supporters who were promised a copy of Kickstarter, don't worry, you won't have to miss out. We've got a special reward level planned for you!